In the fall of 1943, nearly 4 million men and women of the United States Armed Forces were deployed in Europe and the South Pacific as the fighting in World War II escalated.

Nancy and I and our classmates at Lincoln school in Gettysburg were supporting the war effort in numerous ways. For example, during October and November of ’43, students set school records for War Bonds and Stamps sales totaling $1,890.50. During a Bond Drive the following March, our students raised $6,556.70.

In March of 1943, students at Lincoln School collect 28,903 tin cans for the war effort, more than any school in Adams County. We also collected rags, paper, rubber, scrap metal, aluminum foil  and milkweed pods. At home we saved bacon grease. The glycerine in recycled fat was used to make ammunition and some medicines.

When an air raid siren sounded during school, Nancy and I remember leaving our classrooms and going out into the inner hallways, sitting on the floor and putting our hands over our heads.

When the air raid siren was heard at night, no light could be seen from any part of our houses. Nancy’s father was an Air Raid Warden during the war, responsible for checking every home in his sector in Gettysburg during a drill.

Betty Weiland, the wife of a classmate who lived in the country during the war wrote that she lived on a farm, and they were also required to turn off lights until the all-clear was sounded

World War II impacted our lives in many ways,  and the question asked regularly in movies shorts, posters, radio  and in our schools was, “Are you doing everything you can?” I like to think we tried our best.

Posted by Bruce and Nancy at 8:01 AM No comments:

7. The 75th Anniversary of the Battle of Gettysburg

Growing Up in Gettysburg was initially intended to be limited to the years after I moved to that famous historic town in 1942, but Nancy was born there, and  she witnessed an event in 1938 when she was seven that deserves to be mentioned here

Thousands of visitors from all over the country came to Gettysburg from June 29 to July 6, 1938 in observance of the 75th anniversary of the battle which occurred in the historic town in 1863. For five of those days, Gettysburg was declared the official seat of the Pennsylvania government.

Among those in attendance were 1,500 Union veterans and 500 Confederate veterans, honored guests of the state and national governments. Visitors were able to meet and greet the veterans in their Anniversary Camp set up on the Emmitsburg Road.

The program for the eight-day observance included lectures, parades, fireworks, a 48 plane air show, religious services and daily concerts by the U.S. Army Band, but the featured event was the dedication of the Eternal Light Peace Memorial, and the primary speaker was President Franklin D. Roosevelt.

Nancy remembers going with her father to the dedication, but she doesn't recall seeing the President. Our classmate, Bill Snyder, however, has a vivid memory of sitting on his father's shoulders and catching a glimpse of FDR in his Cadillac convertible with a Cavalry escort.

When the Peace Light was dedicated, it was intended that the flame should burn forever, but just a few months after World War II began in 1941, the visible flame was discontinued at night at the suggestion of the local defense authorities. The invisible pilot light continued to burn until the war was over when the visible flame burned 24 hours a day again.

NOTE:   Film clips of the 75th Anniversary of the Battle of Gettysburg are available on uTube.

Posted by Bruce and Nancy at 7:50 AM No comments:

One of the main attractions in the famous town where Nancy and I grew up was the Gettysburg National Museum. It was the first place we took friends and family who were interested in learning about the historic battle, because it was the home of the popular Electric Map.

The 900 square foot, 12-ton terrain map was created by Joe Rosensteel in 1939. It was viewed from tiered seating which gave visitors an excellent view of how the three-day battle evolved.

While narrating the events that occurred during the battle, Rosensteel operated a switchboard which activated over 600 colored lights showing the positions of Union and Confederate Armies as they developed.

The walls of the Museum were lined with artifacts from the battle, and bullets, allegedly found on the Battlefield, were sold in the souvenir shop where Nancy worked during summer vacations from college.

When Nancy’s father created the family Victory Garden during World War II,   Nancy found several bullets from the battle. I looked for artifacts in our family garden on East Middle Street, but apparently, no one shot in that direction on July 1, 2 and 3 of 1863. 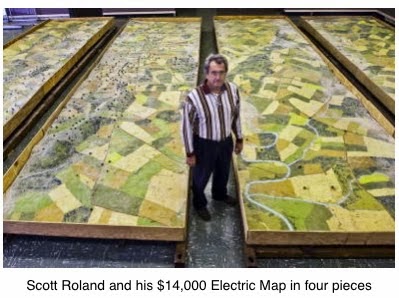 Renovations to the original map were made in the 60ies, and in 1963 the Museum was sold to the National Park Service. When the new Visitor Center opened on the Baltimore Pike in 2008, Scott Roland of Hanover paid $14,000 for the unique map which will be displayed in that nearby town. In 2009, the building which housed the famous Electric Map was demolished, and the popular Gettysburg attraction is now only a vivid memory.

Posted by Bruce and Nancy at 10:19 AM No comments:

The Gettysburg National Military Park which was simply called the “Battlefield” in the Forties when we were growing up in the small town made famous in 1863, and it was ours to explore and enjoy.

General Meade’s Headquarters between Hancock Avenue and the Taneytown Road was an easy one mile bike ride from Nancy’s home on Baltimore Street. Today, it is locked and secured, but back in the Forties it was open, and Nancy remembers how frightened she was to explore the dark, damp basement of that little house with friends when she was young.

According to one source, there are 26 miles of paved road on the Battlefield. Over the years, Nancy and I have biked and/or hiked just about every mile alone, together or with other friends. When I was a Boy Scout, we were required to do a 14 mile hike to qualify for a First Class rank, and Bill Snyder and I walked just about every one of our 14 miles on the Battlefield.

As a Boy Scout,  I also remember a weekend when our Troop 77 camped on Pardee Field, a small grassy meadow south of Spangler’s Springs.  Just over 80 years after fierce fighting on that field, members of our Troop put up pup tents, got water from the spring, cooked on wood fires and told ghost stories around the fire at night.  Today the Spring is closed.

The towers on the Battlefield provided excellent sites for Boy Scouts to practice relaying messages using Flag Semaphore during the day or Morse Code with lanterns at night. People are not permitted to be on the Battlefield after dark now, but in the Forties, that was no problem.

Growing up in Gettysburg was a wonderful experience, and as we recall other adventures from our past, we’ll be sharing them with our readers.

Posted by Bruce and Nancy at 4:35 AM No comments: