In earlier posts, I mentioned that when Nancy and I were growing up in Gettysburg in the Forties, the Battlefield was ours to hike, bike and explore. We were aware of remote streams, fields and paths through the woods which tourists and probably many local residents never knew existed. 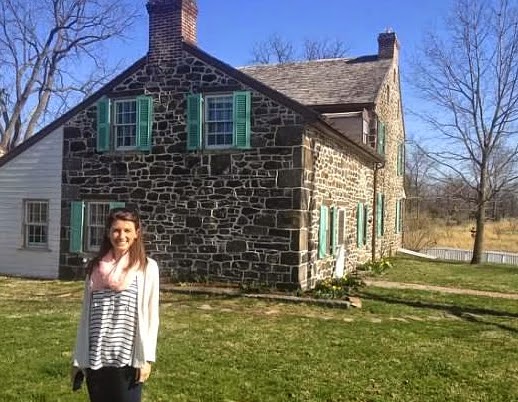 On more than one occasion, we explored a rock quarry in the woods southwest of Culp’s Hill.  At that time, we weren’t aware of another quarry in Rose’s Woods which has special significance for Nancy. In 1863, Nancy’s GGGreat Uncle, Francis C. Ogden, was a tenant farmer on the Rose's property where over 6,000 men were killed and wounded on the second day of the Battle. That fight occurred in a field Ogden had plowed and planted. Today, it's called The Wheatfield.
It’s quite possible that the Gettysburg Granite from the quarry in Rose’s Woods provided the stone for the farmhouse where Nancy’s uncle, his wife and six children lived.

The quarry near Culp’s Hill, the one in Rose’s Woods and several others on the Battlefield provided material for many of the monument bases and markers placed at the flanks of where regiments were positioned in July of 1863.

We took the Battlefield for granted in the Forties and never gave much thought to how it was developed over the  years, with the monuments, markers, memorials and cannon visitors see today.

According to a 1944 report by the Dean of Gettysburg Guides, J. Warren Gilbert, during the first veterans reunion in 1887, there were no official roads on the Battlefield, and visitors were required to use private lanes on farm properties. Only a few monuments existed then. Today, there are more than 26 miles of paved roads and over 1,300 monuments, markers and memorials.


Our granddaughter, Lindsey Bailey, a GGGG Grandniece of Francis Ogden, is in the photo above. The stone building in the background is the Rose Farmhouse. The picture was taken in 2014.