The United States involvement in World War II began December 7, 1941 and ended with the Japanese surrender on September 2, 1945. Though it was fought thousands of miles from Gettysburg, its effects were quite apparent in our hometown, even for junior high classmates like Nancy and me.

The July 3,1944 issue of the Gettysburg Times included an Independence Day Tribute honoring the more that 3,100 men and women from Adams County who were in the service in World War II.

A headline in that edition reported that, “At least 20 Adams Countians Have Made the ‘Supreme Sacrifice.”  Another headline noted that several others were Prisoners of War in Japan and Germany. 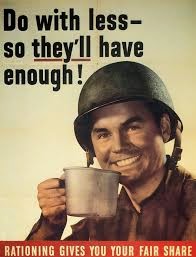 Food and fuel rationing during the war had a negative impact on everyone in Gettysburg especially those businesses that depended on tourists. Nancy and I remember when we rode our bikes on the Battlefield during the War, it was often devoid of traffic.

Life was not the same for residents of Gettysburg as it was before the War, but our sacrifices were insignificant compared to those who served in the Armed Forces far from home.