After a delay of two weeks because of concerns about polio in Adams County, Nancy and I finally started eighth grade at Lincoln School in Gettysburg on Monday, September 18, 1944.

World War II continued in Europe and the South Pacific with Allied victories reported in both areas. Residents of Gettysburg were reminded of the war often as convoys of troops moved through the village streets almost daily. We were also reminded of the cost of war when the local papers reported on County residents who were killed or wounded in action.

For Nancy and me, the war was personal as her Uncle John Strevig was an Army Chaplain in Italy, my Uncle Bud Houck was a cook in the South Pacific, and my Dad, Carl Westerdahl, was a Seabee in Gulfport, Mississippi.

Uncle Bud, who died in 1966, is buried in the Gettysburg National Cemetery, and every December Nancy and I, with friends and family members, place a Christmas Wreath on his grave and many others. The annual event is sponsored by the Sgt. Mac Foundation and the National Wreath Project.

Nancy and I didn’t really know each other in eighth grade. I do recall seeing her as I passed through her room on the way to English class. One of her hobbies was collecting novelty pins that she wore on her blouse or sweater. If that was a scheme to get boys to notice her, it worked on me, but no one would have predicted our wedding nine years later. 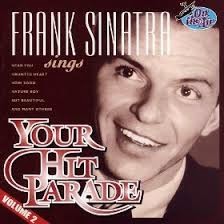 Nancy’s diary often mentions the most popular songs of that year as reported on a radio program called Your Hit Parade. On Saturday, September 9, for example, the number one song was I’ll Be Seeing You by Bing Crosby. Bing was popular in 1944, but it was a twenty-nine year old baritone from Hoboken, New Jersey named Frank Sinatra who had the teenage bobby soxers screaming and swooning in the aisles. Some of the girls in our class were huge Sinatra fans.

The 1994-45 school year began with optimism that we were winning the war,  and the 3,100 men and women from Adams County serving around the world would soon be coming back to their friends and families.