When Nancy and I were in eighth grade at Lincoln School in Gettysburg in 1944-45, our students bought Savings Stamps and War Bonds and collected scrap iron and other materials to make equipment for our troops fighting in World War II in Europe and the South Pacific.

In January of 1945, Lincoln School students won the Adams County Salvage Honors for collecting 12,688 tin cans the previous month. That was 61 cans per student, one of the highest ratios in the State.

Later that month, the Gettysburg Times reported that our eighth grade homerooms bought so many War Bonds, the money raised could buy a walkie-talkie, a pair of binoculars, a blockbuster bomb, a first aid kit and a Jeep!

Also in January a new Youth Center opened on Chambersburg Street for junior high students on Friday evenings from 7 to 10. In a previous post, we noted that  at junior high dances, the boys hung out together and watched the girls dance. Rarely did you see boys and girls dancing together.

I started at center on the Lincoln School basketball team in eighth grade, and Nancy was a cheerleader. Basketball was a different game in the Forties. Set shots were made with two hands and foul shots were scooped up from below the waist. 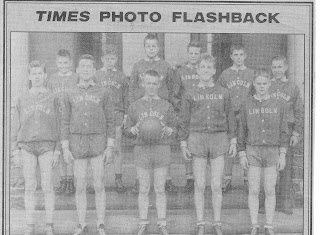 There was no game clock, and freezing the ball meant fans could take a nap, and the score would be the same when they woke up. Scoring was a reason for celebrating . . . by fans only. A player who celebrated after scoring would find himself on the bench for the rest of the game.  My average of two goals per game was enough to rank me second in scoring for the season.

When the season was over, our captain, Bill Eisenhart, had a party at his house where most of us smoked cigarettes and thought we were cool.