In the fall of 1944 when Nancy and I were in eighth grade at Lincoln School, the local news reported costly damage to coin operated viewing machines on the Battlefield. Apparently, in an attempt to recover the dimes used to operate the giant binoculars, the tops of the $700 machines were broken open.

In addition, two monuments were damaged and names were scrawled on others. Vandalism was also reported at Spangler’s Spring. Undoubtedly, it was incidents like these that ultimately led to the National Park closing from dusk until dawn.

When I turned twelve in 1943, I joined Boy Scout Troop 77 at the Methodist Church on East Middle Street. Jack Cessna, the physics teacher at the high school, was the scoutmaster, and he kept us active working for merit badges and camping on the Battlefield and sites throughout Adams County.

My days as a Boy Scout ended the night our scoutmaster took us to a Gettysburg High School football game during a scheduled weekly meeting. Gettysburg was losing the game when our scoutmaster ordered us back to the meeting room. I went AWOL so I could watch the rest of the game, and that was the end of my career in Scouting.


It was late in the football season when Johnny Aughinbaugh and I were invited to practice with the varsity. Subsequently, we were ground down, swallowed up and spit out by linemen fifty to sixty pounds heavier and three or four years older. I still wonder why the coaches thought that was a good idea. 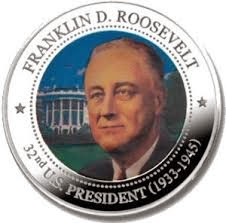 On November 7, of 1944,  President Franklin Roosevelt won his fourth term with Senator Harry Truman as his Vice President, The following April, Roosevelt died, and a month later, the war with Nazi Germany was over. President Harry Truman would now lead our country in the war against Japan.
Posted by Bruce and Nancy at 7:44 AM