Nancy and I have lots of memories from eighth grade at Lincoln School which began September 18 after a two week delay because a new case of polio was discovered in the County earlier in the month.

Front page news on September 15 announced that World War II was going well for the Allies. US Marine and Army assault forces were converging on Palau and Morotai which General Douglas MacArthur, hero of the war in the South Pacific,  called the last stronghold barring our troops from the Philippines.

According to Nancy’s diary, the number one song on the Hit Parade on the radio was I’ll Walk Alone sung by Dinah Shore. The only entertainment medium available to us at that time was movies, radio and 78 records.

TV wasn’t available until after the War, and then the first shows we  watched were on a a small set in the window of Baker’s Radio and Television Store on Baltimore Street. Each night, crowds would stand outside the store watching college and professional sports. 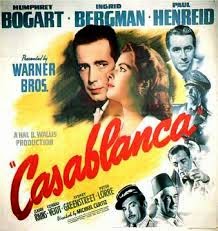 Going to the movies was a weekly ritual, and each time a new movie came to town, we were there. The Academy Award for best motion picture in 1944 went to  Casablanca with Humphrey Bogart and Ingrid Bergman.

One of the most misquoted lines in the history of movies was spoken by Bergman who asked  piano player Sam (Dooley Wilson) to “Play it, Sam. Play ‘As Time Goes By.’”  Bergman never said, “Play it again, Sam.”

Our first science project in eighth grade was a collection of leaves which we dried, identified and placed in an album. Another collection that fall in which every school child in the US participated was gathering milkweed pods used to make life saving jackets and belts for the military. The goal across the country was to gather 1,500,000 pounds of milkweed!