29. Telephones and Records in the Forties

Growing up in Gettysburg in the Forties, telephone party lines were common. As Nancy and I recall, both our families had four-party lines which meant three other families shared each line with us. Pick the phone up at any time, and you might hear one of your neighbors talking. If you were an eavesdropper, you might hear news that you wouldn’t read in the daily newspaper.

Each home on a party line had a specific ringing cadence. For example your distinctive ring might be two longs and a short and your neighbor might be two shorts and a long. Parents and phone companies asked us to limit our phone calls to five minutes, but Nancy and I remember talking for as long as 30 minutes.

When I wanted to call her, I picked up the receiver and if no one was one the line, the operator said, “Number please,” and I would answer “29 W.” 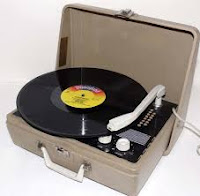 Vinyl records that played at 78 revolutions per minute were also popular in the Forties and are now only seen on ebay or in antique stores. They were most often played on a portable record player.

Nancy and I enjoyed listening to the popular music of the day, and her diaries from the Forties often mention spending time listening to artists like Kay Kayser, Sammy Kaye, Perry Como, Bing Crosby and of course, Frank Sinatra.

My mother worked at the Bookmart on Chambersburg Street in Gettysburg where records were sold, and a feature of the store was the availability of booths where customers could play a record before deciding if they wanted to buy it.

Party telephone lines and 78 records are left behind with no regrets, but there are some things like a Chocho on a warm summer day that we still miss.
Posted by Bruce and Nancy at 2:14 PM 1 comment: 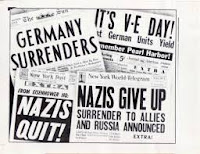 Nancy and I were only one month away from graduating from eighth grade when the front page of the Gettysburg Times reported in huge bold letters the news everyone waited four long years to hear: GERMANY SURRENDERS.

On May 7, 1945, the chief of staff of the German army, General Gustav-Jodl, signed the unconditional surrender, and Admiral Karl Doenitz ordered the capitulation of all German fighting forces.

According to the Times, the people of Gettysburg remained calm as they waited for the official announcements from Washington, London and Moscow. In anticipation of that news from the Allied leaders, Victory in Europe Day services were planned for the following evening at 8:15 on the square.

The following day, photos of Stalin, Churchill and Truman appeared on the front page of the Times which reported the war in Europe was officially over.

That night, several thousand gathered on the square in Gettysburg to hear leading citizens of the community pay tribute to the servicemen and women who helped defeat Germany.

The speakers expressed our joy for the victory, sorrow for those who lost their lives and a rededication of our effort to defeat the Japanese in the West where the war would continue for another four months. Silent prayer was followed by the singing of the Lord’s Prayer and the Star Spangled Banner.

For Nancy and me and millions of others the continuation of the war with Japan meant our loved ones would not be coming home yet. Not yet!

Posted by Bruce and Nancy at 1:01 PM No comments:

Nancy and I remember very little about eighth grade science at Lincoln School when we were growing up in Gettysburg in the Forties. We do recall an assignment that required each student to collect and mount butterflies.

This was 1945, long before people were concerned about protecting endangered animals and insects. Matter of fact, we were enthusiastic about the project and planned to gather as many different species of the colorful insect as possible.

I began the assignment by rounding out a wire coat hanger and taping it to an old broom handle I had shortened. Then I took a large piece of gauze, sewed the sides and stitched it to the coat hanger. I was now prepared to begin the hunt.

The Battlefield, with it’s large open fields of grass and wild flowers, was the perfect place to begin, and in a few days I collected nine different species to mount and display.

Since eighth grade seventy years ago, I have learned that many others across the country had the same assignment in high school or junior high.

There are now more than two dozen threatened, endangered and extinct butterflies in the United States. Without a doubt, insensitive teachers and eager competitive students, unfortunately, contributed to that reality.

How many butterflies have you seen lately?
Posted by Bruce and Nancy at 5:31 AM 1 comment:

26. Growing Up in Gettysburg on Baltimore Street

When we were growing up in Gettysburg in the Forties, Nancy lived on Baltimore Street, one of the most important locations during the three-day battle that occurred in that famous village in 1863.

Baltimore street and the adjacent Washington Street were the two north/south roads the Union Army used as the battle began, and on which it retreated in the afternoon and evening of the first day. It was also the route that President Lincoln travelled to deliver his famous speech at the new National Cemetery on November 19.

When Nancy walked the .3 of a mile from the town square to her two story home at the base of the Baltimore Street Hill, she passed numerous sites associated with the battle.

For example, the Presbyterian Church on the corner of Baltimore and East High Street was one of many churches in Gettysburg that served as hospitals during and after the battle. It is also the church President Lincoln attended on the afternoon of his visit to Gettysburg. On February 1, 1963, President and Mrs. Dwight David Eisenhower became members of that church.

As the Union army retreated along Baltimore Street many soldiers hid from the Rebels in houses, basements, attics and sheds of the residents along the way.

One home across from Nancy’s house, was owned by cabinet maker Henry Garlach, and it was here that Union General Alexander Schimmelfennig hid behind a woodpile. When Nancy was growing up, she remembers that a Garlach family still owned the home.

Another historic building across the street from Nancy’s home is the Farnsworth House, which is a restaurant and Inn today and known as one of the most haunted houses in America.  The Farnsworth House and many of the two-story houses along the street were used by Confederate sharpshooters during the three-day battle.

Living and walking on Baltimore Street in Gettysburg was and still is a history lesson about the most significant battle of the Civil War.

Posted by Bruce and Nancy at 8:57 AM No comments: