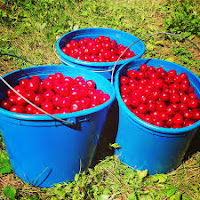 After graduation from eighth grade in Lincoln School in the spring of 1945, it was time to look for a summer job.  Adams County is home to one of the finest fruit producing regions in the United States, and there were lots of opportunities to  work in the orchards north and west of Gettysburg.

After I thinned peaches for a few weeks, Nancy and I both turned to picking sour cherries, which in the summer of 1945 paid forty cents for an eight quart bucket.  Unfortunately, although we were motivated, neither one of us was very proficient at the job, so our daily wages were minimal.

After cherry picking, Nancy spent the rest of that summer helping her Dad in the Victory Garden, and preparing beans, cherries, peaches and tomatoes for freezing or canning. I went on to work in the kitchen at a church camp in Connecticut until the middle of August.

For entertainment, Nancy and her friends cheered for their favorite softball team, attended movies at the Majestic and the Strand, visited the Teen Canteen on weekends, and drank lots of cokes at the local soda shops.

World War II in Europe was over in June, but the conflict with Japan continued,  and many soldiers, sailors and Marines would be casualties before the middle of August when the war finally ended.


The most popular song in the summer of 1945 was Sentimental Journey  by the Les Brown Orchestra and sung by Doris Day. Nancy and I would dance to that song many times over the coming years, but not in 1945. Not yet!