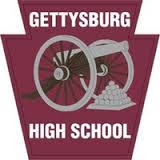 Nancy and I began our freshman year at Gettysburg High School on Tuesday September 4, 1945, a day after Labor Day and less than a month after VJ Day and the end of World War II.

The local paper reported that tourist travel over the battlefield during Labor Day weekend was the largest since 1940 and topped all wartime figures by a huge margin. The National Park Office reported that 11,390 tourists had visited the battlefield that weekend, more than all the visitors that came during all the war years combined.

Nancy and I entered the High School just a block off Baltimore Street, in the approximate location of the current renovated Middle School. The school’s front door was less than 100 yards from the backdoor of Nancy’s home on Baltimore Street.  I lived on East Middle Street, just a four minute walk from the school. We were fourteen at the time, and though we knew each other well, we wouldn’t be dating for another two years.

As we began this next chapter in our lives, we were excited and eager, but often confused moving through the long and unfamiliar halls looking for our next class.

Thanks to the generosity of fellow classmate, Barb Seiferd, Nancy and I have many copies of The Maroon and White, our school newspaper which was so well done and which received many national honors during our four years at GHS. We will refer to the paper often in future posts.

The October 10 issue of that paper reported that we had 175 students in our freshman class. Nancy and I were surprised to see that number, because four years later only 140 students were in our graduating class. Sadly more than half the classmates with whom we shared our joys and our successes over four years are deceased.


At the time, we had no thought about building memories that would last a lifetime. We just wanted to find the next class and arrive on time.
Posted by Bruce and Nancy at 4:48 PM