36. Growing Up in Gettysburg: High School Football in 1945

The fall of 1945 was a time of great anticipation for many families in Gettysburg. World War II was over, and the men and women of Adams County who had served in the military were on their way home. Joyful reunions with loved ones who were apart, sometimes for years, were occurring all over the County that fall.

At Gettysburg High School, students were anticipating another football season. After winning only one game during the past two years, the team was making a fresh start under a new coach, Bill Ridinger, who had an enviable record at Columbia High School.

Those of us who were just beginning to compete in high school football were nervous and excited wondering how we would perform playing the game which in 1945, looked a bit different from what we watch today. 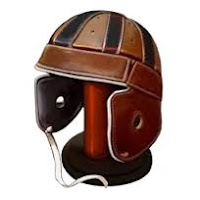 As a freshman, I played Junior Varsity football. We played in hand-me-down uniforms and equipment including unpainted leather helmets with no face guard. Matter of fact, I played football from 1945 through 1951 and never wore a face guard which was only available if you had a broken nose.

Our football jerseys were made of  wool, and the pants were  a canvas material that hung loosely on our legs. Our shoes were also hand-me-downs from the Varsity, often disfigured from many years of wear.

We played the game on a natural grass field.  I still remember the pleasant odor of newly mown grass on a chilly fall evening under the lights.  Sometimes after rain, we played in mud, and when a grass field was frozen, it was like playing on concrete. Artificial turf on a football field was unknown until 1966 when it was installed for the first time in the Astrodome in Houston

The game was different as well. I didn’t experience two-platoon football until I played in college in 1950. All through high school I played offense and defense, and substitutions were rare. Quarterback were trusted to call the plays and a no-huddle offense was unknown. Passing was limited.

Although the uniforms, fields and formations may have changed since 1945, the human element has not. Football is still a game played with passion, commitment, perseverance and enthusiasm by those who love it.