When Nancy and I were freshmen at Gettysburg High School in 1945, did we look any different than the students entering high school seventy years later in 2015? A check of our 1945-46 yearbook and a trip down memory lane reveals there were definitely differences.

For example, no one wore blue jeans in 1945.  During WWII, blue jeans were declared an essential commodity and were only sold to people who worked in the war industry. Jeans didn’t become popular with teens until the Fifties. 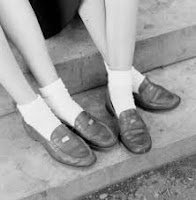 In our 1945-46 yearbook, most of the girls are pictured wearing white sox and loafers. It was the traditional footwear for that time, and it resulted in the name bobbysoxer.  Bobbysoxers had the reputation of screaming and swooning when they attended a concert by a heartthrob like Frank Sinatra.  The yearbook photos also show girls in blouses and knee length skirts. Slacks were never worn to school in the Forties.

The only shoes the boys wore that were different were clodhoppers, large, heavy boots that a few of the boldest guys painted with names of girls, sports teams or movie stars. No one wore sneakers. They were for gym class only.

We don’t remember boys wearing shoulder length hair, pony tails, beards or mustaches. Moms and coaches would have objected. Some of us had crew cuts or flat tops. I got my haircut every two weeks at the Varsity Barber Shop on Baltimore Street where the conversation was typically about high school, college and professional sports.

Finally, low cut blouses, T shirts and clothes made from an American flag were never seen in the halls or classrooms of GHS. Shorts were only worn for gym class.

Gettysburg High School freshmen may have dressed differently than they do in 2015, but inside we were the same, anxious about our place in our new school and uncertain about the future.