When Nancy and I were growing up in Gettysburg in the Forties, the Teen Canteen on Baltimore Street played a very significant role in our relationship. It was there on February 21, 1948 while slow dancing, I fell in love with the 17-year-old classmate who was to become my wife five long years later. But in 1946, we barely knew each other outside of the classes we shared together.

Nancy and I would come to know each other well in the fall of 1946 when we were elected officers in the sophomore class. The class picture in the 1947 yearbook is the first photo of us together.

The Teen Canteen in early 1946 was located in a former bank building on the east side of Baltimore Street just a few doors from Middle Street. It had become a popular place for high school kids to go, and in 1945,108 people attended the Labor Day dance where an eight-piece orchestra entertained. 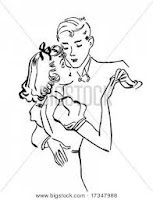 In an article in the Maroon and White in February 0f ’46, high school students expressed their opinions about the Canteen. Freshman classmate Pat Shealer offered one of the most colorful comments saying, “It’s a swell place to spend an evening. Hubba!”

Senior Janice Cole said, “I like it for it gives the kids two things to do instead of one which is going to the movies”


The February Maroon and White also featured an article announcing the Canteen would soon be open two nights a week and not just Saturday.
Posted by Bruce and Nancy at 1:26 PM