In our post last week about Growing Up in Gettysburg, we made a brief mention of  autograph books which were popular in junior high schools back in the Forties. The idea was for each classmate to have his or her own book and to ask as many people as possible to sign it.

About twenty years ago, Nancy and I were looking through a box of memorabilia, and we found the autograph books we started in eighth grade.

Everyone who signed Nancy's book, thought she was pretty sweet and said so with unoriginal verses like: 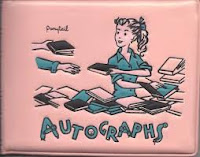 The boys were a little more creative with their messages:

"Roses are wilted and violets are dead.
The sugar is lumpy and so is your head!"

We don’t remember autograph books at Gettysburg High School. Perhaps that’s because our yearbooks, signed by friends and fellow students, were a substitute for autograph books.

We were pleased to discover that autograph books are still popular. Certainly, finding our books signed long ago helped us remember the friends of our youth, especially the friend who signed Nancy's book with this beautiful verse:

“When memory with her golden key unlocks the past, remember me.”

We hope Growing Up in Gettysburg is a “golden key” that helps readers unlock the past in our hometown.

Posted by Bruce and Nancy at 6:48 AM No comments: 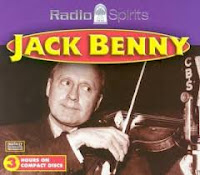 When we stopped for gas, someone cleaned our windshield, checked the oil, pumped the gas, air was free and we got green stamps.

When we  went to the movies, we always saw a cartoon.

When water balloons were the ultimate weapon.

When we made a telephone call, it was always placed through a switch-board operator, and many phones were on a party line.

When washing machines had ringers, we dumped the wash water on the garden, and we hung the wash on a line in the backyard.

When catching fireflies could happily occupy us for an entire evening.

When people sat on their front porch after dinner and greeted their neighbors passing by.

When we loved reading The Saturday Evening Post and Life each week.

When everyone in your class had an autograph book and every classmate was invited to sign it.


When life’s most embarrassing moment was being chosen last for a pick up game.

Posted by Bruce and Nancy at 1:45 PM No comments:

When Nancy and I were fifteen growing up in Gettysburg in the early Forties, we were too young to obtain a Driver’s License or even a Learner’s Permit. Our primary way to get around Gettysburg was to walk or ride our single-speed bikes. We never heard of or saw a 3-speed, 5-speed or any other speed bike.

Every business or home in the Borough of Gettysburg was and still is easily accessible by bike. For a leisurely ride, we headed to the Battlefield. Nancy  would ride out Hancock Avenue toward the Pennsylvania Monument, and I would take East Confederate Avenue toward Spangler’s Spring. 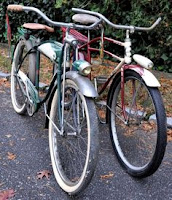 On a hot summer day, a popular destination was The Battlefield Swimming Pool south of Gettysburg on the Baltimore Pike. Informally known as Jack’s Pool, it was not very big and only six-foot deep. It didn’t take many teenagers before the pool was quite full.

Bikes in the forties had some distinct features you don’t see today. The frame was heavier, we had fenders and our tires were much fatter than those on road bikes today. To customize our bikes, we added accessories like mud guards, a headlight and speedometer, a horn, rear view mirror and Texas handlebars, so called because they resembled the horns on a Texas Longhorn.

Nancy’s favorite accessory was a wire basket mounted in front of her handlebars. The basket is where she put the groceries, but it was a lot more fun to put her small dog Daisy in the basket and take her for a ride.

One accessory that we never had and never saw was a helmet. We never saw a bicycle lock either. There was no need for a bicycle lock, one of the many advantages to growing up in a small town in the Forties.


Looking back at biking when we were growing up in Gettysburg is just one of many fond memories we have of our lives there in the Forties.

Posted by Bruce and Nancy at 1:12 PM No comments:

One of the most popular posts on Growing Up in Gettysburg referred to the slang words and phrases from the Forties that might not be understood by current high school students.

Now let’s look at a few common words and phrases we currently use  which would have drawn blank stares in the Forties. For example, if I asked a classmate in 1946 if he had seen my latest post on Facebook, he would have had no idea what I was talking about.

Here is a short list of words in our current vocabulary that would not be understood by people in the Forties: email, hi tech, social media, morph, rock star, retro, global warming, climate change, video, meth and pixels

These proper nouns were also unknown to us when we were Growing Up in Gettysburg in the Forties: Twitter, iPhones, iCloud, iWatch, iBook, iPad, iMovie, iTunes, YouTube, Google, Hyundai, Amazon, Pay Pal, Corvette, Twitter, eBay and Buffalo wings.

In addition, there are many acronyms and abbreviations we all recognize today, but we never heard of in the Forties: NASA, TSA, AIDS, NSA, DEA, OSHA, NAFTA, ESPN, PBS, NOVA, AARP, IBM.


Finally, text messaging was an unknown method of communicating when we were in school, and the 1,424 abbreviations used in texting would be like Greek to anyone in the Forties. JSYK
Posted by Bruce and Nancy at 1:06 PM No comments: