62. Gettysburg Prepares for the Summer of '46

In the spring of 1946, officials connected to the tourist trade in Gettysburg where Nancy and I grew up in the Forties, expected the busiest tourist season since before World War II.

In April of that year, Superintendent of the Gettysburg National Park, J. Walter Coleman, reported that travel over the battlefield in 1946 was expected to be the same or above pre-war averages.

In preparation for the thousands of tourists, additional staff was added to repair fences and signs and restore roads to pre-war condition. 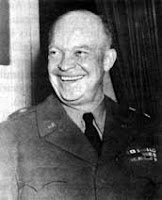 The biggest event in Gettysburg in the spring of 1946 occurred on May 27 when General Dwight D. “”Ike” Eisenhower, Chief of Staff of the United States Army and the former supreme commander of the Allied Forces in Europe, spoke at the Gettysburg College Commencement.

One special feature of that event was the dedication of a plaque honoring the 60 men from Gettysburg College who gave their lives during World War II.


In the spring of 1946, Nancy played intra-class field hockey and I lettered in varsity track. That year, the track team won all the meets and the Conference Championship by an average of  30 points.
Posted by Bruce and Nancy at 7:53 AM