Nancy and I were not yet sixteen when we were growing up in Gettysburg in the summer of 1946, so we were not eligible for a work permit. Nancy helped her mother with summer chores like canning and freezing fruits and vegetables. She also helped her father in the garden where they grew tomatoes and string beans.

Even though I didn’t have a work permit, I was employed as a member of the ground crew at Camp Nawakwa, a Lutheran camp twenty minutes northwest of Gettysburg. I worked on construction projects, mowed and dug ditches for a new waterline.

Summers in Gettysburg in 1946 could be unbearably hot and humid, so Nancy and I swam often. She cooled off in the Battlefield Swimming Pool south of Gettysburg and I swam in the pool at camp which was always freezing. On weekends, we  often picnicked with family at any one of numerous parks in Adams County.

TV was not yet popular in 1946, so we found our entertainment listening to the radio or going to one of the two Warner Brothers Theaters in Gettysburg.  There was a teen canteen in town in 1946, and we remember that it was located in the first block of Baltimore Street in an abandoned bank building.

In August, The Gettysburg Times reported that Burgess C. A. Heiges instructed borough police to begin enforcing the town’s 1917 curfew which provides that during Standard Time all youngsters under 18 years of age must be off the streets of town by 9:00. During Daylight Savings Time the curfew limit would be 10:00 p.m.


Nancy and I remember no curfews so we assume this law was rescinded sometime later that year.

Posted by Bruce and Nancy at 8:34 AM No comments: 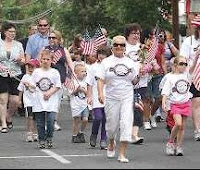 When Nancy and I were growing up in Gettysburg in the Forties, we always looked forward to the Memorial Day Parade in May.  The event in 1946 was special, because it was the first peace-time observance of Memorial Day since 1941.

Following police escorts and the parade marshals, the Gettysburg High School Band led 1,000 school children dressed in white and carrying flowers which were later strewn on the graves in the National Cemetery. It’s a tradition that continues to this day.

Veterans from World War I and World War II marched with bands, drum and bugle corps, community organizations, and members of the Veterans of Foreign Wars and American Legion. A unit of the Pennsylvania National Guard with motorized equipment was followed by the speaker John Bricker, the former Governor of Ohio, and honored guests.

Nancy’s home in the Forties was on Baltimore Street, the perfect place to watch a Memorial Day Parade, and every year friends and family would gather in front of her house in lawn chairs to enjoy the  spectacle. A picnic for family and guests always followed the parade.


May was also time for the annual spring concert at Gettysburg High School. In 1946, the concert included  a number by the freshman chorus which was accompanied by Nancy Ogden. And “No,” Nancy Ogden and Bruce Westerdahl were not a couple yet, and we probably weren’t even dancing together then. That would happen in the fall of 1947.

Posted by Bruce and Nancy at 2:02 PM No comments: 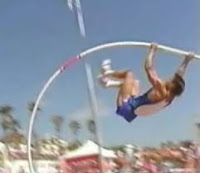