74. The Thrill of Victory

I was a lowly sophomore in October of 1946 playing in my fourth Gettysburg High School varsity football game, and the team was scheduled to  meet Hanover on their field.  Hanover, a team we had not beaten in ten years, was undefeated that season, and they were clearly favored.

Given the odds against us, over 4,000 fans were undoubtedly surprised when the fourth quarter began and neither team had scored. Then, with six minutes left, our fullback big Joe Hess plowed through right guard for the first score of the game.

Back in the Forties football coaches were not enthusiastic about passing, and that was certainly true in our game with Hanover that night when we only passed the ball four times, three for completions. Fortunately, I was on the receiving end for at least one pass, and it was good for the extra point, and we took the lead 7-0. 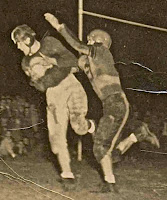 The drama was not over. With two minutes to play, Hanover also scored a touchdown, but missed the place kick for the extra point. Underrated Gettysburg High School won the game 7-6.

Imagine our surprise when the team bus returned to Gettysburg, and we were greeted by hundreds of fans including Nancy. Escorted by those enthusiastic fans and the high school band, the team paraded from our school to Baltimore Street and then up to the square where the celebration continued.


I played high school and college football for seven years and was part of many good teams, but no win was as sweet as the victory over Hanover that chilly October night in 1946 when I was just fifteen.

Posted by Bruce and Nancy at 5:20 AM No comments:

73. Radio Jingles in the Forties

In our last post about growing up in Gettysburg in the Forties, Nancy and I  mentioned that radio was one of our most popular forms of entertainment when we were teenagers.. Singing commercials, or jingles as we called them, were a significant part of radio at that time.

The singing commercial can be traced back to before World War II, and our earliest recollection of jingles coincides with that fact. The very first singing commercial on the radio we remember was sponsored by Pepsi-Cola about 1939. Here are the lyrics to that popular jingle:

Twice as much for a nickel too. Pepsi-Cola is the drink for you.

The message in the jingle was almost true. The familiar, contoured Coke bottle was 6.5 ounces, but the slight discrepancy didn't hinder new Pepsi drinkers who quickly increased the latter’s share of the market as a result of the jingle. It took Coke sixteen years to respond to Pepsi's challenge before introducing a larger size bottle.

Many of the early radio ads were based on popular folk songs, such as the Camel cigarette jingle which was sung to the tune of Eating Goober Peas. 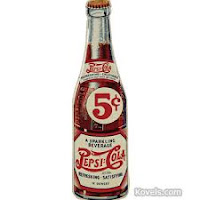 Now let us report on the 1946 season of the Gettysburg High School  football team whose victory over York Catholic broke a twelve game losing streak that began two years earlier. Unfortunately, the team lost to Carlisle in the game that followed, but in our next post we will have news about a  surprising and stunning victory over a traditional rival.

Posted by Bruce and Nancy at 5:00 AM No comments: 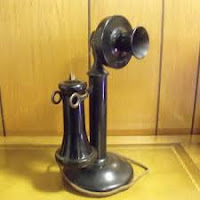 Recently, a friend grumbled about technology and how much time her young children spend entertaining themselves on their smartphones.  Her complaint prompted Nancy and me to recall the technology available to us when we were growing up in Gettysburg in the Forties.

For example, we had one telephone in each home, and neither was push button or dial up.  We simply picked up the receiver from the cradle  and an operator asked, “Number please.” If I were calling Nancy, I would say,“29W.”  We couldn’t take, send or receive a picture with the phone, we couldn’t ask Siri questions, and we couldn’t walk around with the phone, because it was connected to the wall by a wire.

Another miracle of technology in the Forties was the jukebox. One of our favorite places to dance was Woodlawn where they had a colorful and sophisticated Wurlitzer jukebox that played 78 rpm records. We can still remember  dancing to all the popular music of the day by Frank, Bing, Dinah, Perry or Tex Beneke and the Glenn Miller Orchestra.

Two other entertainment technologies we enjoyed were the movies and the radio.  As I write today, my radio is playing music of the Forties, and I am reminded that radio still remains a favorite after all these years.

Readers of our blog will recall that we promised to report on Gettysburg High School football in 1946. After we lost the first game to Delone 13-6, Coach Forney told us we would win games that season. We didn’t have to wait long, because we beat York Catholic in the next game 19-0. The victory broke a 12 game losing streak that extended back to 1944. Big Joe Hess was responsible for all the points. The win was particularly sweet for a team that was victory starved for three seasons.

Posted by Bruce and Nancy at 1:05 PM No comments:

71. Novelty Songs from the Forties

When Nancy and I were sophomores at Gettysburg High School in 1946, the music we enjoyed on the radio or our record players included songs with beautiful and unforgettable lyrics like:

And who can forget the memorable and catchy lyrics to Mairzy Doats?

Some people called them novelty songs. Others referred to them as nonsense songs. In any case, the peculiar thing is that to this day Nancy and I are cursed to remember all the words to these and numerous other stupid songs but have trouble remembering what we ate for lunch two days ago.

Some years ago, I did a program of nonsense songs for a group of senior citizens, and most of them enthusiastically sang the lyrics like they had just heard them recently.

We suspect that such music was not meant for dancing but primarily for our listening pleasure either on the radio or on a 78rpm record we could play over and over until the words were imbedded in our memories.

Let’s end our brief description of novelty tunes with the lyrics for Chi Baba Chi Baba which was recorded by Perry Como in 1947 and went to number one on the Billboard chart:

Posted by Bruce and Nancy at 2:17 PM No comments: 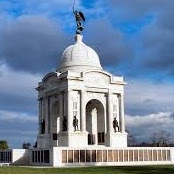 In September of 1946, Nancy and I were beginning our sophomore year at Gettysburg High School in the historic town where we grew up. The big news that fall was that tourist travel to Gettysburg returned to near normal since prior to World War II.

The National Park Service estimated that 508,641 visitors toured the Battlefield during the 1946 tourist season. Today, Gettysburg attracts well over a million visitors during the same period each year. Heavy traffic and large crowds are two major changes we notice when Nancy and I visit our hometown.

Early in the school year in 1946, students at Gettysburg High School were asked to vote for class officers. Strangely, two of the students  elected by the sophomores would ultimately spend a lifetime together. Nancy was elected secretary of the class, and I was elected president.

In our last post we promised to report the result of the first football game in ’46. On September 13, we lost to a seasoned Delone team 13-6. At times, it looked like our team would end the long drought that resulted in a single win the two previous seasons. A fumble in the final period on their own 31, led to the Delone win.


“Don’t be discouraged,” Coach Forney told us later. “You will win games this year!”
Posted by Bruce and Nancy at 1:56 PM No comments: