In an earlier post on Growing Up in Gettysburg in the Forties, Nancy and I wrote about the Adams County Library which opened in January of 1945 when we were freshmen at Gettysburg High School. 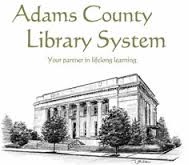 Many years ago, Barb Seiferd, a member of the Class of ’49, gave us copies of our school newspaper, the Maroon and White, published when we were students. Recently, I found an article in the November 20,1946 issue reporting that the Library’s collection now totaled 8,000 books.

That article prompted us to recall the changes we observed in the Library as it moved from Carlisle Street to the former jail building on High Street to the current location on Baltimore Street, formerly the Gettysburg Post Office.

One of the most dramatic changes in the Library is the increase in the number of volumes now available to the public. To determine that total, I called the Library and was informed by the staff that there are now 172,156 books in the collection.

The article from the 1946 Maroon and White also reported that 36,000 books were borrowed the previous year, and over 60 percent were borrowed from the Bookmobile. The Bookmobile continues to be a major asset today as it visits over fifty locations throughout Adams County.  What a joy that must be for the children throughout the County when they see the  Bookmobile arrive at their school.


I have  no proof, but I feel certain Nancy and I were among the original members of the Library which has served the people of Adams County so well since we were freshmen at Gettysburg High School.