The 1946 Christmas Season in Gettysburg where Nancy and I grew up was packed with a variety of memorable activities for two busy and enthusiastic high school sophomores.

The month of December was filled with numerous opportunities for dancing  sponsored by the Student Council, the Elks Club, the Gettysburg High School Alumni, and the Teen Canteen.

Nancy was an avid and adept dancer, and by December 1946 I was no longer shy about dancing with girls, so we are certain we attended most, if not all, those  events.  Unfortunately, I was taught an unorthodox style of slow dancing, and that led to some awkward stumbling with my partners.

Obviously, after seventy years, there is much we have forgotten, but we still  have vivid memories of two events that occurred during the Christmas Season in 1946 and are still popular today.

The Christmas Song, subtitled Chestnuts Roasting on the Open Fire, was released by Capital records in December of 1946. The song, featuring Nat King Cole, has an ageless charm, and I still get choked up when I hear it. 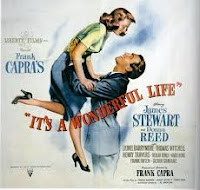 The ultimate holiday classic movie, It’s A Wonderful Life” starring Jimmy Stewart, made it’s premier in December of 1946, and ultimately, became one of the most  popular movies of the 20th Century.