When Nancy and I were growing up in Gettysburg, we were members of the historic Evangelical and Reformed church on South Stratton Street. We went to Sunday School, attended worship services and sang in the youth choir.

On July 1, 1863, the first day of the Battle of Gettysburg, Union troops fighting north of the town were overwhelmed by Confederates under Jubal Early. As the defeated units retreated through Gettysburg, wounded men were brought to the church which served as a hospital.

Sgt. Reuben Ruch wrote that at least ten operating tables were set up in a lower room where holes were drilled in the wooden floor to let the blood drain.

There is also evidence that the bell tower of the church was used by Confederate sharpshooters, probably men from the Louisiana Tigers who occupied that area of Gettysburg until July 4. 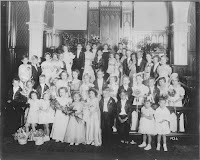 On Tuesday, May 21, 1936, when she was five, Nancy was bride in a Tom Thumb Wedding in the church involving more than more than forty children. The wedding was so well attended, an overflow crowd required a second performance the following day.

Seventeen years later, on May 30, 1953, Nancy and I were married in our  church giving her the unusual distinction of being married three times in the the same church to two different grooms.