91. President Lincoln and the Gettysburg Address

Gettysburg, Pennsylvania, where Nancy and I grew up in the Forties, is famous for the Civil War battle that occurred there in 1863. The village is also widely known, because it was there on November 19 of 1863 that Abraham Lincoln delivered one of the best known speeches in American History___ The Gettysburg Address.

On November 19, 1947, the students at Gettysburg High School were excused early so we could witness the eighty-fourth anniversary celebration of the dedication of the Gettysburg National Cemetery and President Lincoln’s enduring speech.

Unfortunately, we remember very little about the occasion with one exception. Claude Rains, the famous English film star who was nominated four times for an Oscar for Best Supporting actor recited the Gettysburg Address at the ceremony.

Many people who assume that Lincoln delivered his speech with a rich baritone are surprised to learn his voice was high pitched. In the award winning movie Lincoln, Daniel Day Lewis did his best to impersonate the sound of that voice as he spoke the Gettysburg Address. Here’s a link to the actor’s speech:  https://www.youtube.com/watch?v=Oem_yji7qEQ 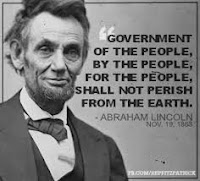 Currently, on November 19 each year, the Gettysburg National Cemetery is rededicated and Lincoln’s speech is remembered in the annual Dedication Day ceremonies and Remembrance Day Parade.  The parade attracts thousands of spectators and reenactors alike.

The Annual Remembrance Illumination ceremony occurs in the evening on November 19. The ceremony features luminary candles on each of the 3,512 Civil War soldiers’ graves, and the names of each of the known deceased are read throughout the evening.