When Nancy and I were growing up in Gettysburg in the Forties, our school newspaper was the Maroon and White, and it won a first place honor award in 1947 in competition sponsored by the Quill and Scroll International. The judges called the paper “an enterprise providing worthwhile and exciting experiences for its staff.”

The Wednesday, September 17, 1947 issue of the Maroon and White had two full pages of girls’ and boys’ sports including an article about our first football game which we lost to Delone Catholic 25 - 6. 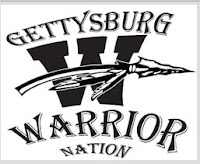 The team won only three games the previous year, and expectations were high that the 1947 team could improve on that record. I was one of only six lettermen returning to the team.

In a small box on the sports page under the heading, Attention Sports Fans, there was an appeal for suggestions for a name for our teams which were alternately referred to as, “The Little Bullets,” the “Junior Bullets and the “Maroons.” A vote sponsored by the Student Council in our senior year finally created the Warriors, the name teams still use today.

The coming attractions at the Majestic Movie Theater were advertised in the same issue of the Maroon and White, and as usual, three different films were offered within a week. Going to the movies at the Majestic or the Strand  was a popular pastime in the Forties before television. No wonder Nancy mentions it so often in her diary.

When the 1947-48 academic year opened at Gettysburg High School, enrollment increased over the previous year by nearly one hundred students.  As a result, high school enrollment of 660 students set a new record.  Today, enrollment at the Gettysburg Area High School exceeds 1,000.