96. Dances Were Frequent and Popular

Nancy’s diary for January and February of 1948 reveals that she and her friends often attended dances sponsored by the school, the canteen, the Elks Club and various service clubs. 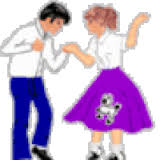 The senior canteen sponsored by the Gettysburg recreation center was especially popular with older teens. On January 19, for example 260 teenagers attended the canteen at the  Gettysburg Hotel Annex, and of course, Nancy was there with her girlfriends.

I believe it was a dance at the canteen when I first realized what a very special girl Nancy was. But more about that in a future post.

There were also dances after basketball games on Fridays when the basketball team played at home.The team ended January on a seven game winning streak before losing to Waynesboro, a team they had beaten handily in early January.