When Nancy and I inform others that we grew up in Gettysburg, they often tell us how much they love and admire our hometown.  Some even speak of moving there. Obviously, they fail to comprehend what it’s like in a small town sharing the streets and sidewalks with over a million tourists a year.

When we were growing up in Gettysburg in the early Forties during World War II, gas, oil and tires were rationed, and new cars were no longer available. In addition there was a national speed limit of thirty-five miles per hour.

As a result of the war and rationing, the number of visitors to Gettysburg dropped dramatically from 670,000 in 1941 before the war began to 118,000 during the first year of the conflict.  For the residents of Gettysburg who fought tourist traffic during the busy months, it was a pleasant change, but for motels, restaurants and others who depended on the tourism industry, it was a serious problem.

World War II ended in 1945, and by 1948 when Nancy and I were juniors in high school,  tourism in our town returned to normal. In an article in the Gettysburg Times on May 3, 1948 Dr. J. Walter Colemen, the Gettysburg National Park Superintendent, reported 47,000 visitors toured the Battlefield in April of that year. 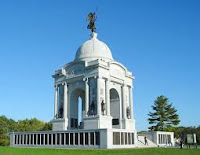 Nancy and I wondered how Park visitation in 1948 compared with the current rate, so we checked with Katie Lawhon, Public Affairs Specialist at the Gettysburg National Military Park, and Katie reported that in April of 2016 112,850 people visited the Park, and by the end of last year visits totlaed well over one million.