The April 7, 1948 issue of the Maroon and White, our Gettysburg High School newspaper, carried a front page article about April Showers the Girls Scout Dance to be held in the school gym on Saturday, April 17.

Although we were together often for school functions and casual meetings at the Teen Canteen, Nancy and I did not date since the previous fall when she invited me to join her for two parties on successive weekends. April Showers would become a major turning point in our relationship, because when I invited her to go the dance with me, I was elated when she quickly agreed.

Nancy worked at Murphy's 5 & 10 on Baltimore Street on weekends, so we didn't get to the dance until 9:00, but according to her diary, she had a wonderful time. So did I apparently, because a few weeks later, she agreed to go with me to the Junior Prom on May15. 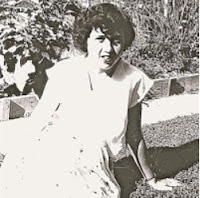 Although dinner, tuxedos and limos were not yet popular, the Junior Prom was a big deal in 1948 with an orchestra, decorations, corsages and gowns for the girls. We weren't aware of it that night, but our future together would be forever measured by that moment in time.

From that night on, we have been a couple, dating through high school and college until five years later on May 30, 1953, we stood before a congregation of family and friends and pledged our love for all time. This year, we will celebrate our sixty-fourth wedding anniversary.

The photo to the left was taken in Nancy's backyard in 1948 at 336 Baltimore Street in Gettysburg.