On one of our most memorable dates in the summer of 1948, Nancy and I traveled to Hershey Park in Hershey, Pennsylvania. Today, you can drive from Gettysburg to Hershey in less than an hour, but back in 1948 there were very few four lane highways and the trip took much longer.

In the Forties, Hershey Park was one of the most popular and entertaining amusement parks in the northeast featuring a roller coaster (Today there are ten.), bumper cars, a merry go round and numerous other rides for kids and adults.  My favorite park attraction was the penny arcade, a Forties version of a video game paradise. The arcade was filled with dozens of game machines testing your strength, skill and patience or predicting your future and even judging your personality.

Nancy and I always enjoyed a walk through the Hershey Zoo followed by a rest in  the shade of the beautifully landscaped  Sunken Garden.  On a warm day, visitors to the Park could cool off in the swimming pool, before heading to the Ballroom.

On a typical weekend, the featured attraction was in the Hershey Park Ballroom where popular big bands of the Forties entertained their fans.In our most memorable visit to the Ballroom, we danced to the music of the Tex Beneke Orchestra.  Beneke led the Glenn Miller Band after Miller disappeared in 1944.  In 1948, Nancy and I danced to songs that would remain our favorites for the rest of our lives ___ Moonlight Serenade, In the Mood, String of Pearls and Long Ago and Far Away. 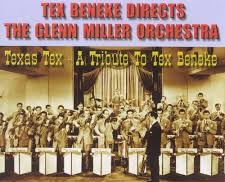 It was a romantic, memorable evening.

The cars we drove in 1948 didn’t have bucket seats or safety belts,  and typically, I drove with my left hand on the wheel and my right arm around Nancy who was snuggled up against me. I’m certain that’s how we motored back to Gettysburg that night. Undoubtedly, there were a few stops on the trip so we could talk about our enjoyable day at Hershey Park.

Posted by Bruce and Nancy at 11:31 AM No comments:

107. 85th Anniversary of the Battle of Gettysburg

Regular readers of Growing Up in Gettysburg recognize that our posts are written chronologically, and we are currently writing about the summer of 1948 between our junior and senior years in high school.

1948 marked the 85th anniversary of the Battle of Gettysburg, so we assumed there would be some recognition of that milestone. Unfortunately, that was not the case. 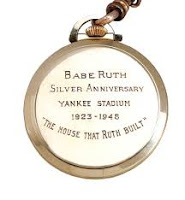 The Gettysburg Times carried stories about the anniversary of the Dubois, Pennsylvania’s fire company and the 25th anniversary of Yankee Stadium. Obviously, there were also many reports about local residents celebrating wedding anniversaries, but we found only one reference to the 85th anniversary of the battle.  It was a poem  by Osborn F. Hevener, and published in the Times on July 3, 1948.


Where Kemper bled and Armistead,
Tall grows the wheat and lush the corn,
Hear I the call of Longstreet’s voice
And rebel yells reborn.
Is Pickett there, in fantasy
To lead his men to death and glory?
Do waving stalks of flowering grain
Spring from the soil to tell a story?

And is that tale, terse and unadorned,
A sonnet sure to make one pause:
“Blow wheat, rise corn, caress the meadow,
We who died knew no Lost Cause.”

Posted by Bruce and Nancy at 8:51 AM No comments: 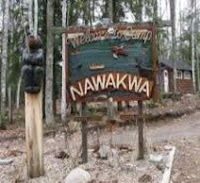 Since the Junior Prom at our high school on May 15,  Nancy and I were together every day at school and often in the evenings as well. Then, on June 2, it was time for  me to leave Gettysburg for my summer job at Camp Nawakwa about twelve miles north of town.

In the summer of 1946, I began working at Nawakwa, a Lutheran camp for  children, youth and adults nestled in 336 wooded acres of the South Mountains.  I lived and worked at the camp each summer for six years initially, on the ground crew but eventually as an assistant to the chef in the camp kitchen.

According to Nancy’s diary, on our last night together, I told her that I would not be seeing her again until the 4th of July. I said, “Absence makes the heart grow fonder.” Hah! Five days later, I hitched a ride to Gettysburg with the camp truck driver, and Nancy and I enjoyed a brief visit on a Sunday afternoon.

That summer, we began writing letters, an activity that would last throughout college, my early tour in the Marine Corps and a fourteen month separation when I was ordered to Japan in 1954. We estimate that from that first letter in 1948 until writing was no longer necessary, each of us wrote well over a thousand letters to each other.

Remarkably, we still have the very first letter Nancy wrote to me postmarked June 3, 1948. It was a brief summary of her activities for the day ending with, “Love, Nancy.”  We also have a letter written to me at Camp on July 4, 1949, and . . . “What a difference a year made!” Our letters by that time clearly indicated that we were very much in love.

Every summer for the next four years, Nancy and I were apart during the week while I worked and lived at Camp Nawakwa, but typically, we found a way to be together for a Saturday night date.

Posted by Bruce and Nancy at 12:20 PM No comments:

105. Crooners of the Forties

Nancy recently discovered a letter from her mother written in 1951 when Nancy was completing the first term of her sophomore year at what is now Shippensburg University. In her opening paragraph, Mother Ogden wrote:

“You’ll just love television, Daddy is having just the grandest time. We’ve had it 2 nights and the house is full of neighbors each night.  Our set is really  nice, the picture is clear and my, what fun. We laughed our sides sore tonight.”

Many people who grew up with television may wonder how we entertained ourselves Growing Up in the Forties without it. In her diaries from the Forties, Nancy often mentions going to the movies which in those days changed several times each week. Throughout high school, Nancy often walked to the soda shops on or near the square, and once or twice each week she visited the Teen Canteen to dance and play games with friends.

But when she was alone at night, she often mentions listening to music on the radio, and back in the Forties, when she turned her radio on in the evening, the crooners were coming into their own led by Frank Sinatra, the most popular singer in broadcasting history. 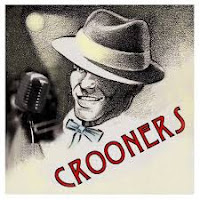 A crooner is a male singer with a soft, intimate style, originally made possible by the introduction of microphones. Crooners were  popular in the Thirties, but our earliest recollections are from the mid-Forties when we listened, and often danced to their music

Nancy and I and most of our friends knew the signature songs that identified each of the crooners as well as the lyrics to many of their recordings. Here are a few favorite crooners with their signature songs:
Perry Como Prisoner of Love
Frankie Laine That’s My Desire
Vaughn Monroe Racing with the Moon
Dean Martin Everybody Loves Somebody Sometime
Andy Williams Moon River
Bing Crosby The Blue of the Night  (From the Thirties)
Posted by Bruce and Nancy at 12:19 PM No comments: