114. A Very Special Day in Gettysburg

The celebration of the 85th anniversary of the dedication of the Gettysburg National Cemetery began early in the morning of November 19, 1948.  That was the day the Lincoln-Gettysburg three-cent commemorative stamp, authorized by President  Truman, went on sale at our local post office.
Nancy and I were seniors in high school on that memorable day, and we distinctly remember participating in several of the activities scheduled for the event.

For example, I bought several stamps at the post office and an equal number of first day covers from one of the many vendors present for the occasion. Then, after addressing the envelopes to myself, I dropped them in the mail so they would be stamped FIRST DAY OF ISSUE on November 19, 1948. Later, I sold those stamped envelopes to a collector for a nice profit.
According to reports, more than 50 postal employees worked in the basement of the post office all week prior to November 19 processing hundreds of thousands of requests for stamps and first day covers from collectors all over the world. The stamp and cover are still for sale on eBay.
Coincidentally, the actual document that President Lincoln held in his hand on November 19, 1863, returned to Gettysburg on November 19, 1948 and was displayed on the Freedom Train which arrived the previous day. That treasured document was obviously one of the main attractions for the thousands of people who passed through the train.
In the next few weeks, Nancy and I will write about other activities which were observed on the 85th anniversary of the dedication of the National Cemetery.

Posted by Bruce and Nancy at 8:41 AM No comments:

Nancy’s diaries written in the fall of 1948 indicate that her days were primarily devoted to her studies, work (Murphy’s 5 & 10), dating and enjoying her friends. I was involved in football (end), student council (president), dating and not enough with my studies.

Because Nancy and I were preparing for college, we were required to enroll in three sciences prior to graduation. Nancy chose science, biology and chemistry. I enrolled in science, physics and chemistry. Both of us had no problem fulfilling the requirement until we took chemistry. Each of us considered chemistry our most difficult subject  … and the most useless.

Saturday night dates at the movies or the Teen Canteen followed by a snack at the Sweetland or Bankerts were a regular part of our routine.

Both of us went to Sunday services regularly at the Reformed Church which served as a hospital during the Battle of Gettysburg and where we would eventually marry on May 30, 1953.


Life was good to us when we were dating in high school. Because of our beautiful family and many wonderful memories, it’s even better today.
Posted by Bruce and Nancy at 8:36 AM 1 comment:

When Nancy and I were growing up in Gettysburg in the Forties, we couldn’t go to the movies or shop for groceries or clothing on Sundays. Our parents couldn’t buy beer or liquor and couldn’t buy a car. That’s because the Blue Laws, enacted almost 100 years before Pennsylvania became a state, were the law. 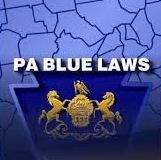 In brief, the Sunday Blue Laws prohibited citizens of the State from “working or participating in any sport or diversion.”  Until 1933, that included  professional baseball and football games which we enjoyed on the radio until the early Fifties when were able to watch Pennsylvania teams on TV.

Blue Laws were intended to force State residents to observe Sunday as a “day of rest,” but over the years so many statutes were enacted, revised,  repealed or misinterpreted most laws became unenforceable.

When Nancy and I were growing up, our parents could only buy alcohol and wine in a State owned and operated liquor store, and there was only one in town. To make a purchase, customers placed their order with a clerk who disappeared briefly and returned with your order. Everything was numbered, so if you couldn’t pronounce Gewürztraminer, you asked for it by number. “I’ll have a bottle of 246.”

The legal age for purchasing liquor or an alcoholic drink in a restaurant was, and still is 21, but Nancy and I had our first cocktail when we were 18 on Christmas Eve in 1949. Nancy’s Dad made Manhattans for us, and I still use his unconventional recipe  today.
Posted by Bruce and Nancy at 6:44 AM No comments: