When Nancy and I were growing up in Gettysburg in the Forties, many of our friends at Gettysburg High School were members of the Future Farmers of America (FFA). Reports in the school newspaper and the Gettysburg Times revealed our fellow students were active in the FFA in Adams and Franklin Counties and in the State as well.

In our senior year, eighty members of the Gettysburg Chapter of the FFA participated in the Farm Show in Harrisburg where three GHS students won State-wide honors.

Many visitors to Gettysburg who come to study the battle, may not realize that our famous town is located in some of the richest farm and orchard country in Pennsylvania. From the town square, you can drive in any direction and you will immediately realize that farming drives the local economy. 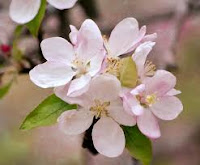 North of Gettysburg, in the South Mountain Fruit Belt, there are 20,000 acres of fruit orchards, and when I was a teenager, I picked cherries in the  late spring and peaches in the summer.

Today, the Adams County Fruit Growers organize the annual Apple Blossom Festival in early May of each year. In 2017, the 62nd Festival was celebrated with a full schedule of entertainment at the South Mountain Fair Grounds in Biglerville north of Gettysburg.