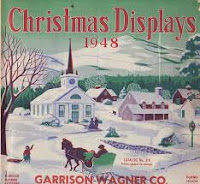 Nancy and I enjoyed our first Christmas together in 1948. How could we possibly know that sixty-nine years later we would return to Gettysburg with thirteen family members and eight friends to participate in the Christmas Wreath Project in the National Cemetery?

Christmas in Gettysburg in 1948 was synonymous with American values at the time. Political Correctness was not yet a concept, and our school choir sang carols all over town, window displays featured scenes from the Nativity and friends and strangers wished each other Merry Christmas when meeting on the street.

Early in December, Nancy was appointed chairman of a school committee to order and distribute name cards for seniors, a tradition that apparently continues to this day. We collected cards from everyone in the graduating class and placed them in a book we lost ago.

At a Christmas Dance following a basketball game on Friday, December 23, we danced to  Buttons and Bows by Dinah Shore, A Tree in the Meadow by Margaret Whiting and Nature Boy by Nat king Cole. The latter was so slow, we could fall asleep dancing before the song was over.


On Broadway, the Musical Kiss Me Kate opened just after Christmas and ran for 1,077 performances in New York City. The following year, it won the first Tony Award presented for for Best Musical, and sixty-nine years later, Nancy and I attended a performance of the musical presented by our local theater group. We call that durable.
Posted by Bruce and Nancy at 6:14 AM