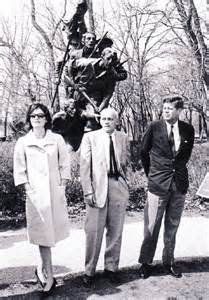 Posted by Bruce and Nancy at 8:04 AM No comments:

In our senior year at Gettysburg High School, Nancy and I were together often on Friday and Saturday nights. A typical Friday night date began after a football game or a basketball game followed by dancing in the school gym, the Teen Canteen or Woodlawn. Our dates usually ended with a late night treat at the Sweetland, the Delecto, Bankert’s, Smitty’s, Weaner’s or one of the other places catering to hungry teenagers.

A memorable date in our senior year was the Valentine’s Day Dance at the Gettysburg Country Club.   The love we expressed for each other that night gave us confidence in a future together. I usually left Nancy on weekend dates at midnight,  but that night I didn’t leave until  2:00 a.m.

Despite keeping late hours on Saturday nights, we regularly went to church on Sunday mornings to the Evangelical and Reformed Church on the corner of South Stratton and East High Streets in Gettysburg. Today, it is known as Trinity United Church of Christ.

Nancy and I were both confirmed in the Reformed Church where we were active on committees and the adult choir. In 1953, after dating for five years, Nancy and I were married in that church.

The end of February marked the completion of boys’ basketball season with a final record of ten wins and ten losses. It was a disappointing record considering the depth of experience on the squad. Our center, Guy Donaldson, was chosen for the All Conference Team, and I led the team in scoring when the season ended.

Posted by Bruce and Nancy at 5:35 AM No comments: